The Gray wolf (Canis lupus) is the largest European canid. It has a slander body with a straight back and a narrow ribcage, its legs are long and close to each other, its tail is bushy. On the dorsal area of the tail, about 10 cm from its base, a black tuft of hair is visible. It covers the supracaudal gland (previously called the violet gland) formed by apocrine and sebaceous glands. The precise function of this gland has not yet been fully known. Most probably its role is to make scent signals during mating season (oestrus) and to communicate with individuals of the opposite sex or its functions are territorial. 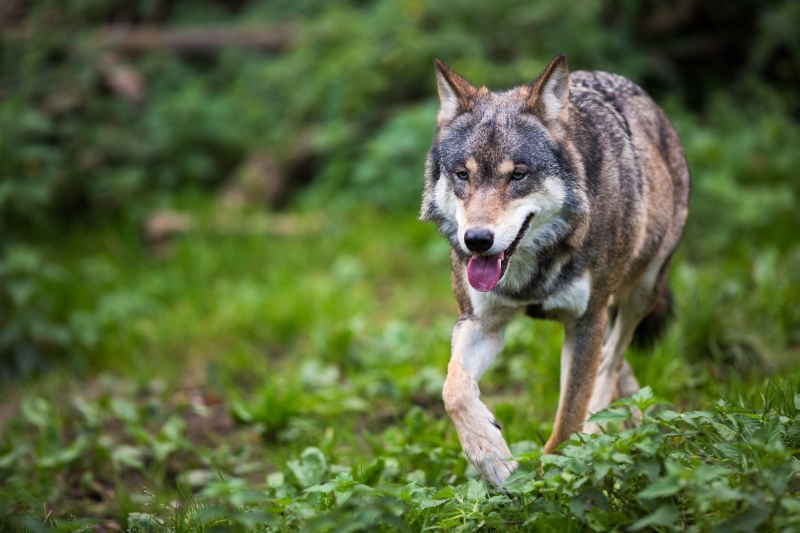 The gray wolf’s head is large with broad forehead, its muzzle is massive and blunt, ears triangular and pointed. Its fore feet have five fingers while hind feet have only four.

Coat color of European wolves ranges from light to dark gray with beige or red shades. Most often the reddish fur occurs in the outer side of legs, the back of head and ears and upper part of the muzzle of an adult individual. Fur color changes with age. Young individuals are usually much darker, right after birth wolf pups are almost black (except for the back of head). The wolf’s dense fur is highly resistant to cold and provides thermal insulation.

Wolves have excellent smell and hearing, their vision is much worse. Howling is used mainly for communication within the family group, but it is also used for indicating their presence and deterring individuals form other groups.

Wolves are carnivores. They have 42 teeth for cutting and crushing.