The brown bear (Ursus arctos) is the largest European carnivore and land-based predator. 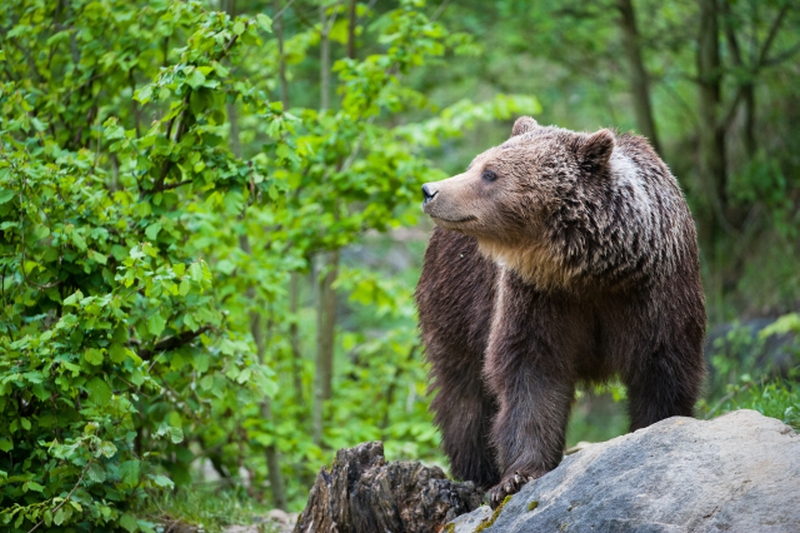 Its body is massive with shoulder blades characteristically protruding over the line of its back. Brown bears have large heads with small, round ears (10-15 cm), their tails are small (7-8 cm). Their legs are massive with paws directed towards body axis. Bears are plantigrade. It is almost impossible to confuse their tracks with those belonging to other animals. The footprints of their hind paws resemble those of a human – they have 5 fingers and a clearly marked heel. Fingers are topped with curved claws, 3-4 cm long. Fore paws also have 5 fingers and massive, curved claws which are 8 cm long (Hell and Ślamečka 1999). Sex dimorphism is marked only in body size of adult individuals. Males are 170-220 cm long, females’ body length varies between 160 and 200 cm. Males typically weight between 170 and 330 kg, females are smaller – 140 to 210 kg on average (Hell and Sládek 1994, no biometric data from Poland is available). Bear’s weigh fluctuates on yearly basis and may change by 30%. Significant body mass loss is observed when bears emerge from hibernation and after mating season while a distinct increase in weight takes place in autumn when they gorge on food preparing for hibernation.

In the Carpathians the brown bear’s fur is of various shades of brown – from light to nearly black. Young individuals often have white fur on their neck in the form of a collar.

Information about bear’s senses remains scarce. It is thought that its best developed sense is smell which enables it to find breeding partners (Selva et al. 2011).

Brown bears have 42 teeth adapted for various types of food. They have huge canines, and molars and premolars with large grinding surface.